WELL...this is not the post I had hoped to share but, then last week was not the week I was planning either.  I had set aside my WHOLE weekend to sew, play with fabric and do nothing else.  Well, I wasn't feeling well first part of the week.  I just couldn't pinpoint it.  I made it to work everyday but, on Friday, I had to leave before the days was up and that was the start of my not so pleasant weekend.
Yuck, just plain yuck.  I did nothing, I am not even sure where the weekend went.  I accomplished nothing in my sewing room or anywhere else.  So, now I am behind the eight ball with my "Name Game" mini quilt.  It is in my head, and a  small part started but, I have a L O N G way to go.  On a good note, I am starting to feel human again and I had a 10 lb weight loss this week!
Posted by kimland at 9:11 PM 6 comments: Links to this post

HOW DOES ONE GET THEIR GROVE BACK???

Since I took an extended hiatus from sewing, I was in need of some "stimulating projects."  The first thing I "committed" too was Fat Quarters, Designer Mystery Block of the Month, using the beautiful fabric line Vintage Modern, by Bonnie & Camile.  OK, the "other reason" for signing up for this BOM, was I wanted to know something would be coming on a regular basis to my "new address." I wanted to know that at least once a month there would be "happy mail" to look forward to. 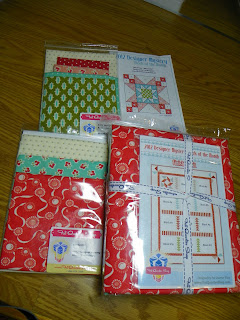 How could this beautiful fabric not make you smile?

Then I saw the sign ups for this little quilt swap... 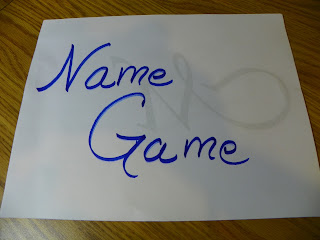 I watched and admired the first round of this swap and drooled over what the girls were creating.  They created little quilts and incorporated the persons name, blogger name, or name of their blog into the quilt.  I so, hoped there would be another round.  Well, there is and I am in!  This swap should get my creative juices flowing.  It is proving to be a good challenge.  We have secret partners and they have shared likes and dislikes and given a little info about themselves.  I so, want to do right by my partner and sometimes that takes thinking outside my box...  I have spent hours sewing in my head, constantly changing directions and, have nothing to show for it!  Oh, dear.  This time around the group has been a bit quiet (not much going on with conversation) in flicker but, projects are starting to pop in and again, they are awesome!!!
Posted by kimland at 8:01 PM 1 comment: Links to this post

YOU HAVE TO START SOMEWHERE...

The FNSI, was the first chance I have had to take time, wind down, and play, in my new sewing room. 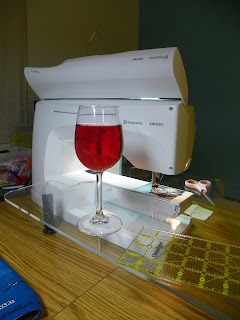 I thought it was a worthy occasion to celebrate.  It was the first stitch I had sewn in over 6 months and it was the maiden voyage in my new sewing room (it is worthy of a post all it's own!).  However, I worked on an "old project." 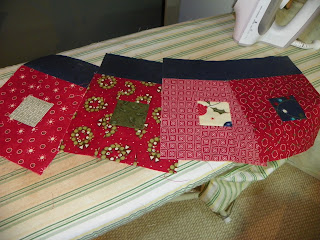 It was not as productive, as I had hoped.  After sewing in my head all day but, needless to say I have an itch for more. I worked on sewing blocks together to make rows. It was a bit frustrating as I thought I knew where I had left off and had to rip out a few seams after realizing I was not putting it together correctly. 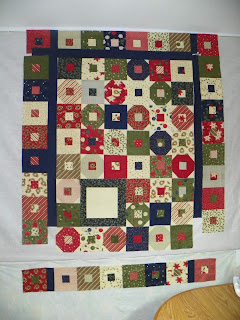 All my rows are complete and now I can assemble them together but, first I need to get the monogram that will go here. 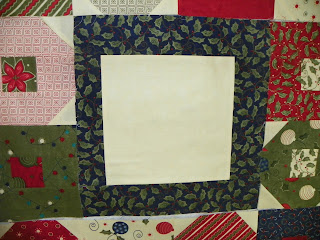 I am thinking red will pop the berries in the holly, quite nicely.

Posted by kimland at 9:17 AM 5 comments: Links to this post 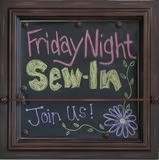 I can't believe I am here, really I am here!  It has been 6 months since my last confession  FNSI.   Way too long and you want to know what's really sad??? The same project is on my design wall!  Yup, that would be the Christmas quilt (wedding gift) as seen down below.  You see, when we moved I rolled up my design wall and just last week, I was able to put it up and there is was the same project.  My sewing room is 75% put together and I am finally at a place in life I can play in my room and fondle fabric without feeling guilty.

Not sure if I will work on the Christmas quilt or play with some new things.  I have a few things up my sleeve to get me back into sewing and get the creative juices flowing.  Just not sure what all I can handle, might be an overload to the brain!  I will let you know sometime tomorrow what kind of fun trouble I find.
Posted by kimland at 8:09 PM 1 comment: Links to this post


I have returned from my Hiatus “A gap or interruption in space, time, or continuity; a break.”
I doubt I have any readers/followers left out there, so in a sense I am starting over.  I even contemplated starting over with a new blog title and everything.  Thinking, I might have more of a chance getting new readers than getting old readers to come back.  Seriously, why would you keep a blogger on your list that has not been dependable?  I just couldn’t part with my blog title, and it seems more appropriate than ever, now.

So, Now Where Was I…

Well, I am physically not in the same place. We still reside in Eastern Iowa but, we have moved, yet again! When we moved to Eastern Iowa four years ago it was to be a temporary rental situation, until we found a house. Well, fours years passed and lots happened on the job front. SO, was getting situated in his position with the company that first brought us to Eastern Iowa, when the talk began of selling. We waited to see what was going to come of that. Finally, last spring the sale went through. We decided to wait, to see if the “new company” takeover was going to be a fit or if they would be restructuring and SO would be released. Well, a good year has come and gone and everything appears to “fit.” SO, even has a new title and new office, he has been moved up into the executive suites (yes, I am bragging but, I have too the man has worked long and hard to get where he is and I am very proud of him. He is a humble man, so I will toot your horn for you, honey!). But, we are both aware everything could end tomorrow and we will still be ourselves.
So feeling comfortable we started “looking and looking.” The BIG move, came the end of February. We acquired the house mid January but, it was not move in ready or at least not our move in ready. SO, has wanted this rural neighborhood since we moved here but, majority of the houses were out or our budget. Finally the break came but, not without a cost. The previous owners were HEAVY smokers, GROSS!!! AND the work began…We had to prime (sealed) and painted, flooring replaced and SCRUBBED for days on end. The house looked so nice and normal from the outside but, the inside was another story. They were a family with three boys and honestly, I don’t think there were many rules. The house had been LIVED IN HARD! Lots of repairs needed. It was like they lived in the house thinking it was disposable and they would just move on before, maintaining. I don’t get it. Don’t get me wrong, I believe a house is to be lived in and enjoyed. It’s going to have its moments and I don’t expect it to appear like a magazine picture.
I might have to share some of the horror pictures with you at a later date. We have dubbed it “the dirty little secret.”

Anyhow, this is our new home… 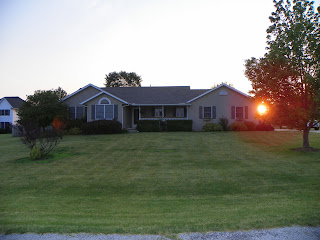 Posted by kimland at 9:30 PM 7 comments: Links to this post

FILLING IN THE CORNERS...

I spent yesterday, adding the corners to every other block in the center.
What do you think? 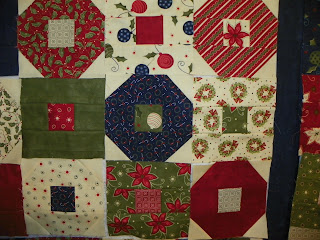 I also, moved the monogram square to it's rightful place... 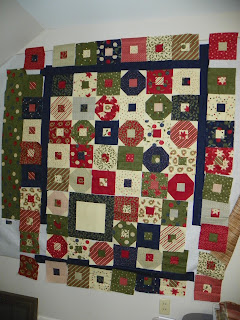 I am good with it,  I think they will stay.  Besides, they have to because I cut them... 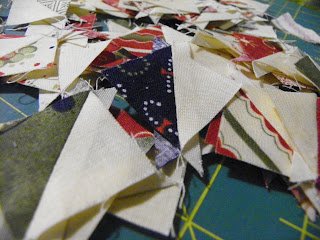 and now have a pile of little half squares.  I don't think I can through these away, they are just too cute!
Posted by kimland at 7:30 AM 2 comments: Links to this post

Last night while it snowed and the winds whirled outside, I was warm and cozy in sewing room.  I am happy with the progress I made 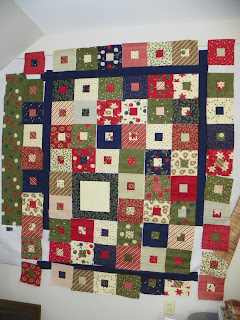 I finished up the sq. blocks and filled the design wall, to get a feel for the layout.  That large blank block in the lower middle is for a monogram.  The pattern also, calls for 1/2 sq triangles(background fabric) on every other corner of the inside blocks.  Which would give it two different block types(regular sq & snowball)  I like it this way, but will try the 1/2 sq triangle on a few to see what I think.

Most of the night was spent roofing my houses. 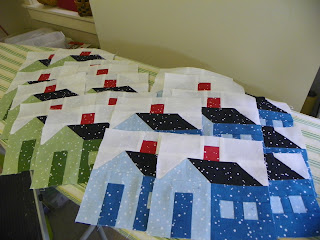 It seems, like there are house blocks all over the place these days and while I like them I wasn't convinced I needed to make any.
Until, I saw these made up into a little quilt at my LQS.  It is a simple quilt but I fell in love with it and kept going back for second look. 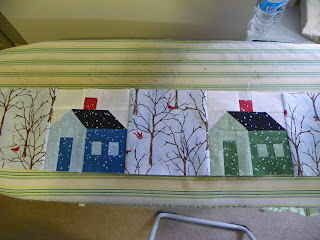 Obviously, I couldn't resist and the kit came home with me.  I am modifying the original just a bit, to make it bigger.   More to come, stay tuned!
Posted by kimland at 2:26 PM 2 comments: Links to this post

kimland
I started quilting in 2005 when I moved to Iowa with my significant- other(SO). This move took us away from our families and I needed something to do with my "alone time." Behold my passion for quilting was born! I am the mother of 3 adult children and grama of 2 precious little boys. Last but not least is Anna our spoiled dog, who fills our empty nest.